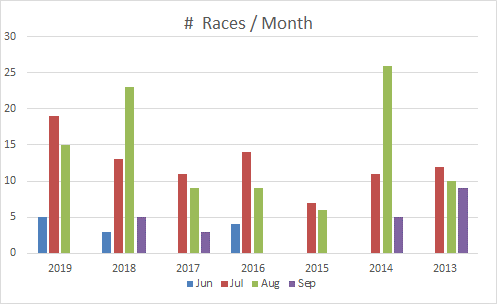 We had a good year of racing, sailing a total of 39 races in the club dinghy series, plus the Sumer of Sailing Regatta, two sailing clinics, and three days of keelboat racing.

17 skippers participated in the dinghy race series.  Nine skippers completed fifteen races, the number required to be competitive in the final results.

The keelboat races on June 23, August 4 and September 1 were well attended; three boats on the line in June, five in August and September.

Al Cade was named the most improved sailor at the AGM, for becoming a successful keel boat racer in 2019.